RUST 9TH BIRTHDAY[rust.facepunch.com]
Rust turns 9 this month, that's 9 years of weekly and monthly updates. We’ll celebrate for one day only on 11th December with in-game birthday cake and hats. 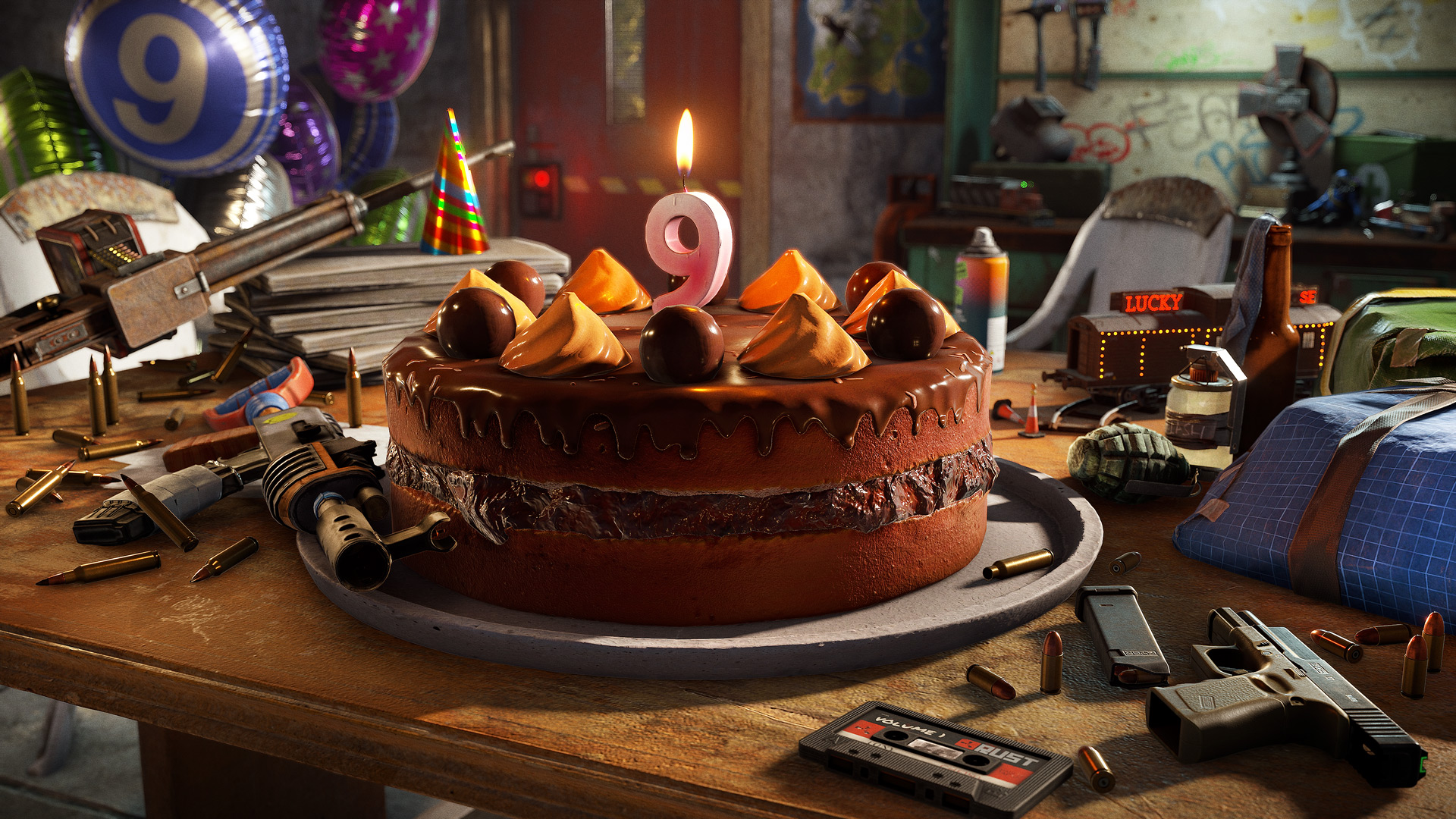 In the January end of years blog, we'll talk more about how 2022 has gone, what we've achieved and what we learned as well as our upcoming plans.

MODULAR CAR CODE LOCKS[rust.facepunch.com]
Car keys have been removed from the game and replaced with code locks, which should be a lot more useful. These can be added at a vehicle lift in the same way key locks were added, and for the same price (75 metal fragments). 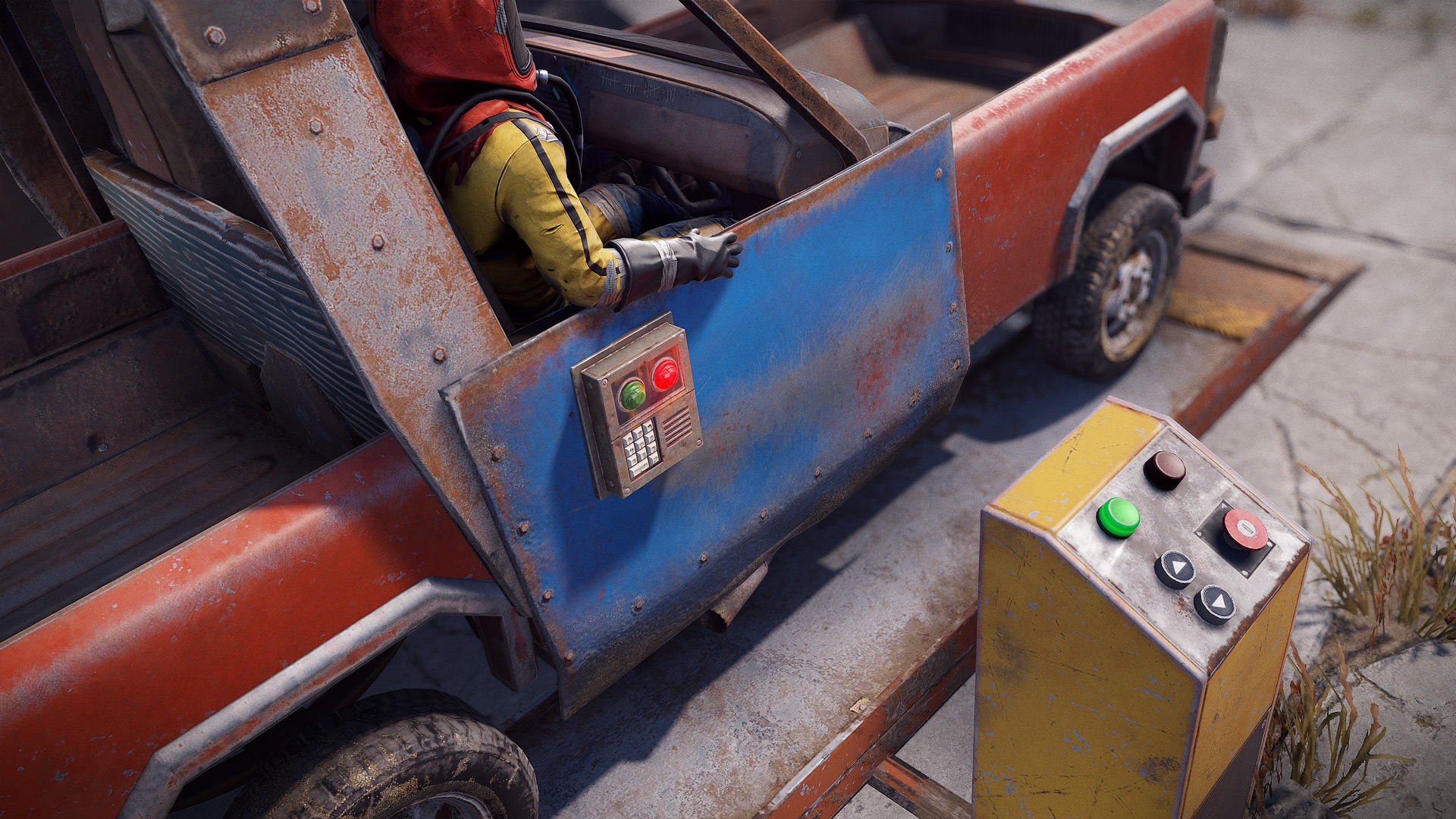 IMPROVEMENTS AND FIXES HIGHLIGHTS[rust.facepunch.com]
Planter Improvements
Harvest/Clone/Remove all plants in a planter in one action

Stone Spear
Stone spear is cheaper and quicker to craft

Roof Rotation
Roof can now be rotated before placement

Grenade Crafting Times
All grenade crafting times have been reduced

Junkpile Scientists
Reduced the number of Scientists at junkpiles

M92 Sway
Reduced sway when aiming with the M92

X Days Upkeep
Shows days of upkeep rather than >72 hours

CABOOSE AT OUTPOST[rust.facepunch.com]
We've added a static (non-moving, indestructible) train caboose at the Outpost, which has the standard casino games inside: Poker, Slots, and the new Blackjack machine - so now you can play without the constant fear of death! 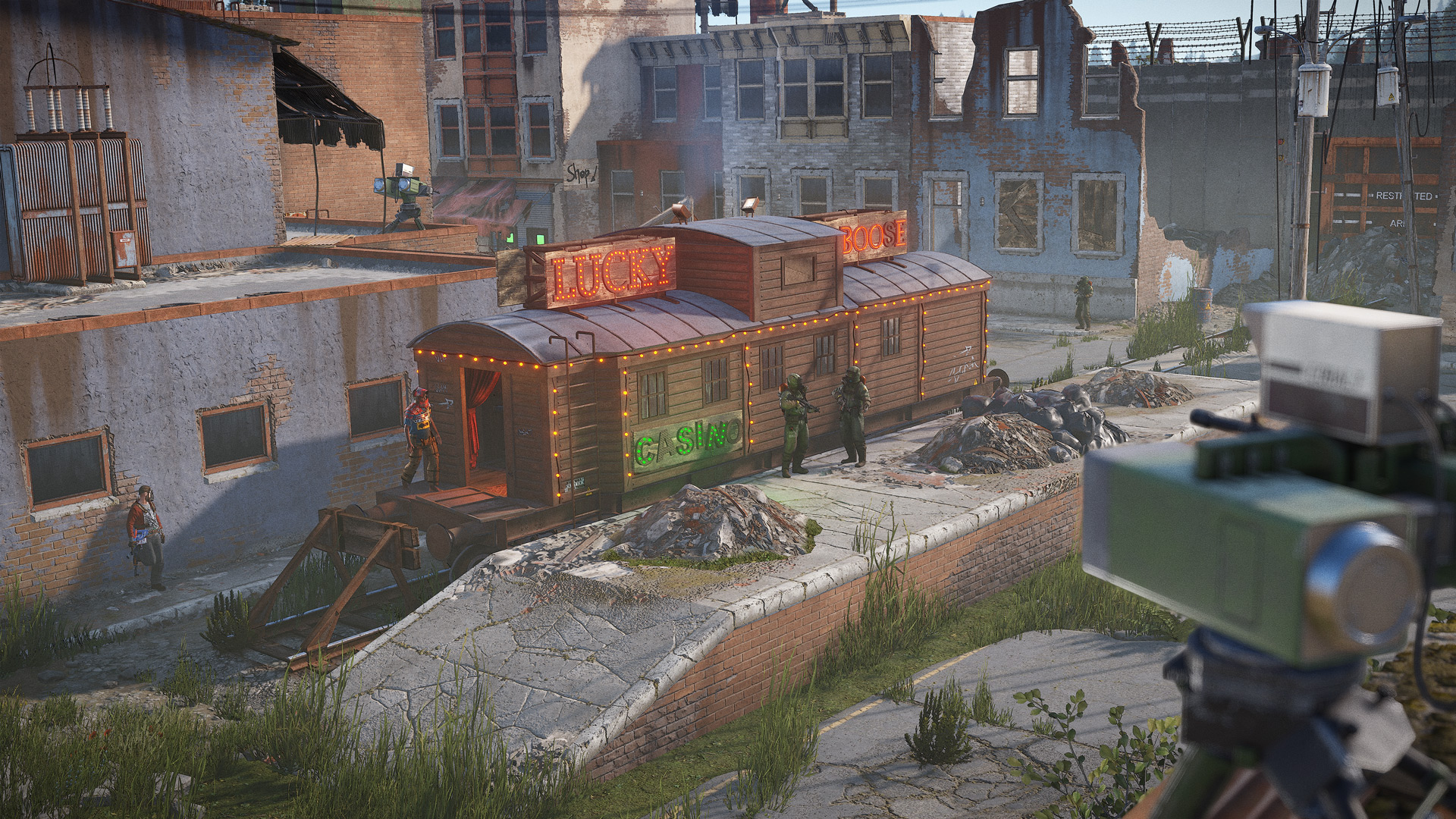 Find it at the small train platform. 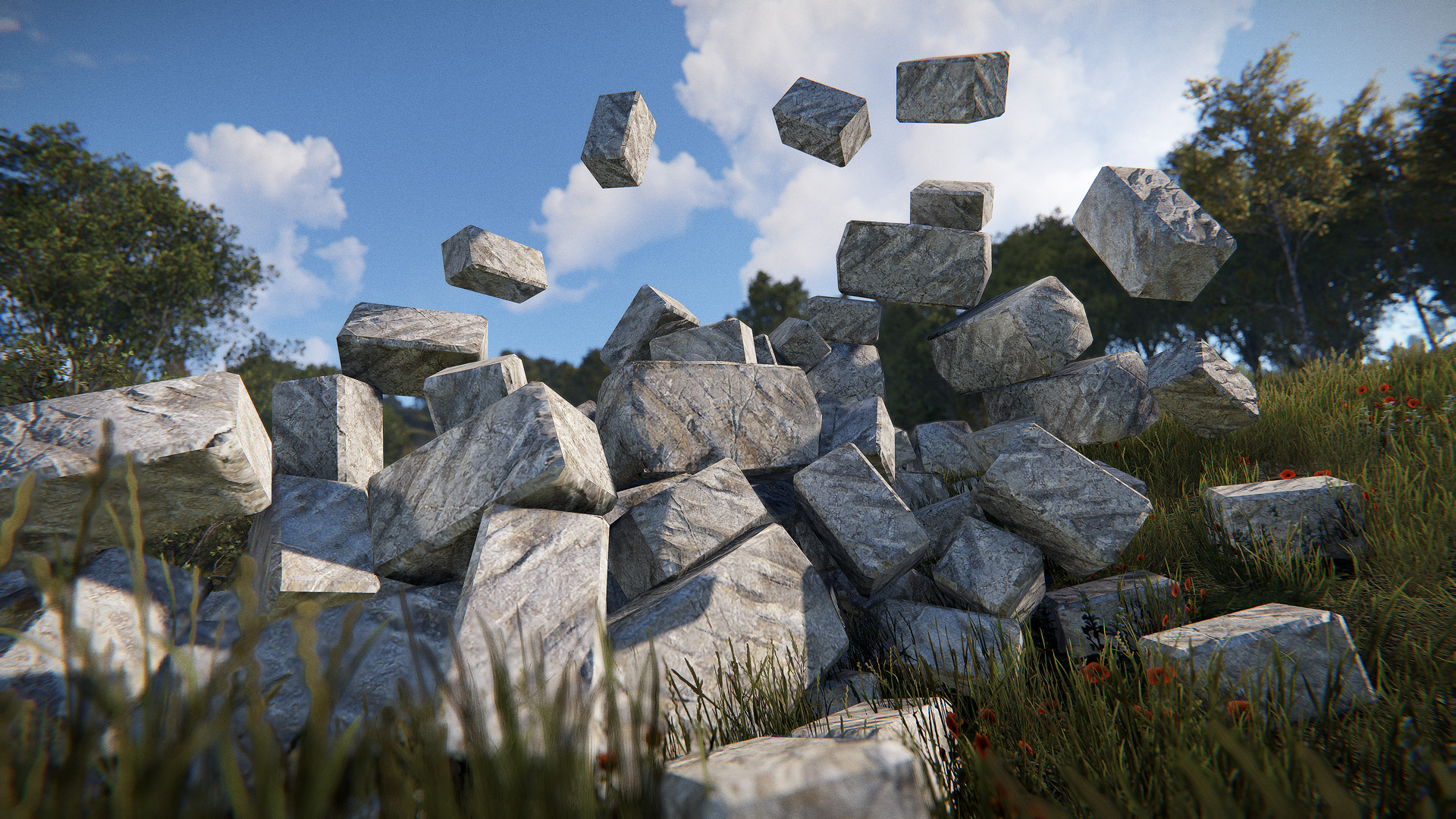 The debris system was introduced in 2019 to prevent the ability to replace walls and doors during raids immediately, we feel this system has worked well but often still see raids won purely from spamming walls. To make it a little fairer for the raiders, from today, external walls and gates now have the debris system applied.

When external gates or walls are destroyed, they'll now leave debris for 2 minutes.

WORLD EVENT NOTIFICATIONS[rust.facepunch.com]
Players will now be automatically notified via a small UI prompt when world events begin, such as Cargoship, Oilrig crate, Ch47 Cargo etc. We hope this encourages players to engage with world events more actively and addresses a growing problem of players using third-party services to gain this information instantly before others and having an unfair advantage.

We acknowledge a UI notification is not the best solution, but for now, it'll put everyone on the same playing field while we work towards a better solution in the near future.

LR & MP5
The LR and MP5 has seen lower usage since the recoil changes, players who used to opt for the LR often now feel more confident using the AK, so we're experimenting with the following changes:
We'll continue monitoring and adjust accordingly in future updates.

Slug Ammo
Slug ammo is regularly used over large distances effectively, whilst it's great to see slug ammo used to a greater effect with the recent changes, we agree with player feedback it's too effective. The slug should be a hard-hitting option in close to mid-range combat and less effective over larger distances, so I've made the following changes:

QUARRY UPDATE[rust.facepunch.com]
Mining quarries have been updated to run on diesel fuel and output rates greatly improved. In the past, quarries have seen little to no use. We hope these improvements will encourage their use more. We'll be monitoring and tweaking accordingly. 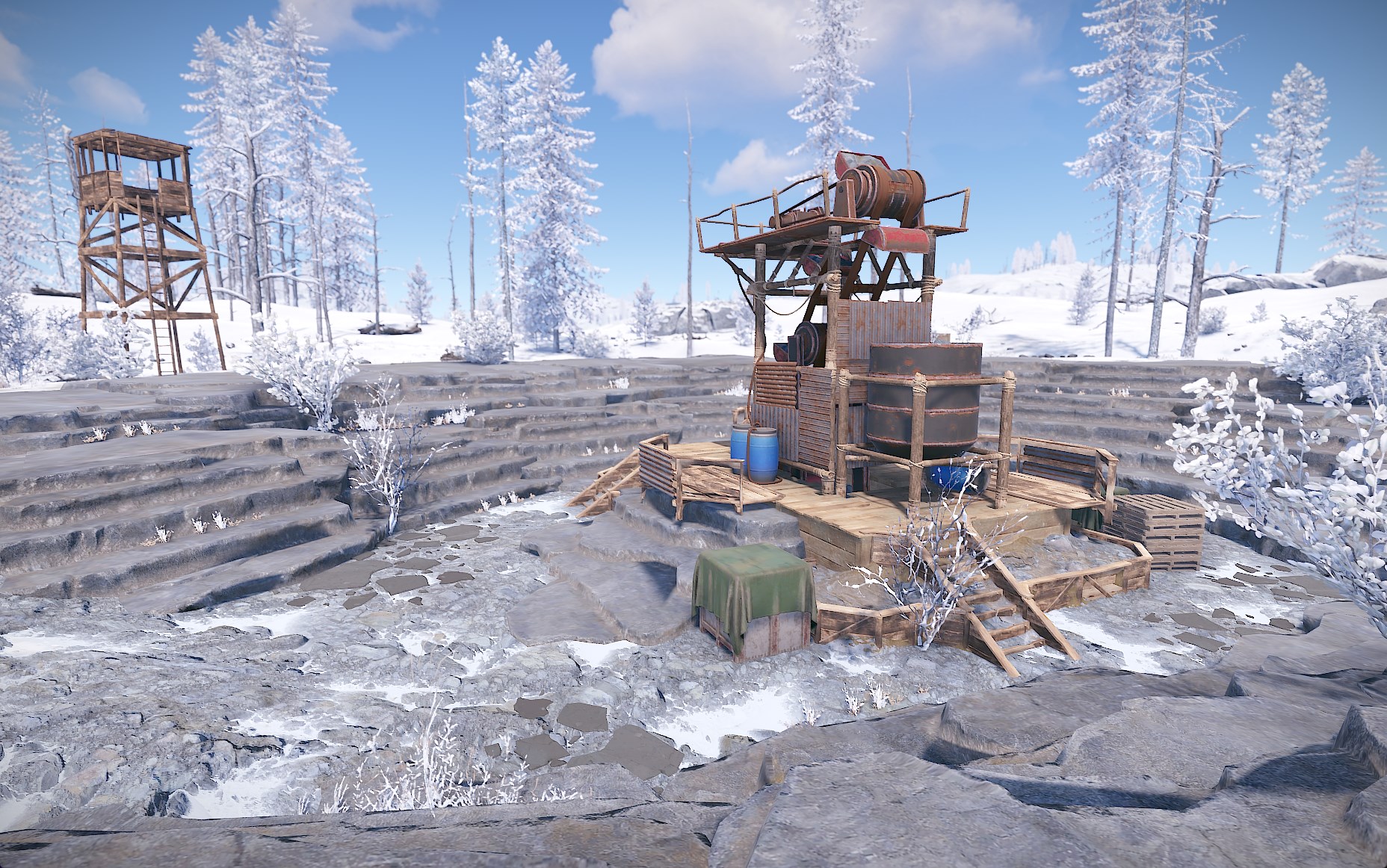 UPDATED COLORED IO[rust.facepunch.com]
There were only 5 colors of wires originally (4 hose colors) which hasn't been enough to organize the creative builds the community has made!

Press "R" while looking at an existing wire to recolor it.

SEPARATE NETWORK GROUPS FOR TUNNELS[rust.facepunch.com]
For some background, network groups are what Rust servers use to figure out which entities to network to players. It basically divides the world up into chunks and tracks which entities are within each chunk. This way the Rust server just needs to network the few chunks around each player.

Previously the world was divided up into a two dimensional grid of chunks, and that worked great for a long time, but then we added the underground tunnels. Using two dimensional network groups means the tunnels would network to players up on the surface, and players in the tunnel are being networked things from the surface, which isn't great because they can't see any of that so it's just wasted work.

JUNKPILE AI[rust.facepunch.com]
I've made a few improvements to help with some of the complaints that people have with Junkpiles.

The bushes that spawn with junkpiles now block AI line of sight. This should make the Scientists easier to spot when they're shooting at you because they will no longer stand in the middle of a bush.

I've also made the junkpile Scientists more defensive in nature, and they won't engage from as far as they used to.

Lastly, I've tweaked the AI data for the junkpile cover positions so they're fully in cover, which has the knock on effect of reducing return fire.

Animals will no longer roam directly to ocean-side locations, to help keep them away from beaches.

Polar bears will now only roam to arctic and tundra areas, and they will also now return to these areas if they need to leave briefly for any other reason.

WORLD FOOT QUICK-EAT[rust.facepunch.com]
I've added a menu option for eating world foods, such as berries, corn, mushrooms, etc, directly from the ground. Look directly at the food and hold E then select "Eat".

You still receive seeds and other items as usual.

NETTING FIXED[rust.facepunch.com]
Netting now allows you to walk above without getting stuck. You can also climb up and slide down without bouncing off the wall frames.

TURRET AUTH EASIER[rust.facepunch.com]
Turret UI used to close after you authorized each player. The UI now stays open after each player you click, until you press "Esc".

WALL PLACEMENT IMPROVEMENT[rust.facepunch.com]
Building jump ups used to be difficult when you had to look down precisely to get it to snap to the correct place. It now will correctly try to attach to the top of walls.

LOCKER FILL IMPROVEMENTS[rust.facepunch.com]
Filling lockers was difficult with the amount of left click dragging required. You should now be able to mindlessly right click armor and have it go into all the correct slots.

SAM SITE PASS-THROUGH[rust.facepunch.com]
It used to be devastating if enemies shot out your SAM sites & were able to shoot off a MLRS strike before you had a chance to react.

As a reminder: This change requires servers to have a separate Steam query port set via the -queryport server startup parameter. When no query port is set, the server will default to either game port + 1 or rcon port + 1, depending on which number is larger.

Hosts of shared servers will need to ensure the query port is forwarded correctly, which is why we are making this announcement ahead of time. Servers can be switched over to Steam Networking for testing via the -swnet startup parameter, which we recommend doing ahead of time in order to ensure a smooth transition.

CHRISTMAS UPDATE[rust.facepunch.com]
On December 15th at 19:00GMT / 14:00 EST we'll be releasing a mandatory server and client update to enable the Xmas event and some festive features!

The community raised over $27,000 in donations alone.

We also put up some unique charity skins on the Rust item store for a week and the proceeds to that go towards the charity as well.

While we do not have exact totals yet and the skin sales take a few weeks to come in but we guestimate $150,000 in total, going to World Central Kitchen[wck.org].

We're very proud of everyone involved and thank you to those that helped out in any ways to make this event possible!
Click here for the source of this article RSS Feed